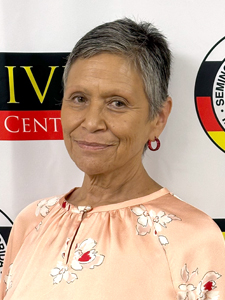 Georgette Palmer Smith, CMM, is the Executive Director for the Seminole Tribe of Florida, Native Learning Center. She is a member of the Kiowa Tribe of Oklahoma and is also of Choctaw descent. In 2010 she joined the team as Director of Administrative Services Program Director for the Native Learning Center. The NLC provides tuition free trainings that achieve the primary objectives of NAHASDA. She also serves as President, Seminole Taft Street Properties, LLC and 6365 Taft, LLC for the Seminole Tribe of Florida.

Georgette came to the Native Learning Center from Tampa, Florida where she was the Director of Member Engagement overseeing the Membership, Conferences and Communications/Marketing Departments for BICSI, the worldwide preeminent source of information, education and knowledge assessment for the information transport systems industry. She produced two major U.S. Conferences, one Canadian Conference and one European Conference in addition to numerous region events annually.

She has served as Director of the Forum and Conference Services for the University of Oklahoma and brings over 30 years of experience in planning and arranging hundreds of different concepts of meetings, trade shows and special events from coast to coast as well as internationally. Georgette is the former Director of Meetings for the American Society for Therapeutic Radiology and Oncology (ASTRO) in Fairfax, Virginia, and Senior Project Manager for the William H. Natcher Conference Center at the National Institutes of Health in Bethesda, Maryland.

In the early 1990’s Georgette began her career as the Director of Convention Services for the National Congress of American Indians in Washington, D.C. During her tenure there she was assigned as the White House Logistical Coordinator representing NCAI for the historic meeting between President Bill Clinton and all 545 Tribal Leaders at the White House on April 29, 1994.

Georgette graduated from the University of Science and Arts of Oklahoma in Chickasha with a Bachelor of Arts degree in communications. She attended the Eli Broad Graduate School of Management, the School of Hospitality Business at Michigan State University where she completed her Certification in Meeting Management. In December 2000 Georgette was officially designated a Certified Meetings Manager (CMM) by Meeting Professionals International (MPI) and Michigan State University. The recognition of MPI’s CMM designees exemplifies MPI’s commitment to one of the seven key goals within the association’s strategic plan.

In October 2004 Georgette created the University of Oklahoma’s first ever Meetings and Event Management Certificate program and served as a member of the OU Outreach Continuing Education faculty.

Georgette has recently been appointed to serve on the Board of Directors of Native Cry Outreach Alliance, Inc. Native Cry Outreach Alliance is an organization made up of dedicated Native, as well as Non-Native, Americans to support a single and important cause. Native Cry is dedicated to suicide prevention awareness, helping survivors of suicide, and people who suffer a loss from suicide within the Native American community as well as other indigenous peoples around the world.